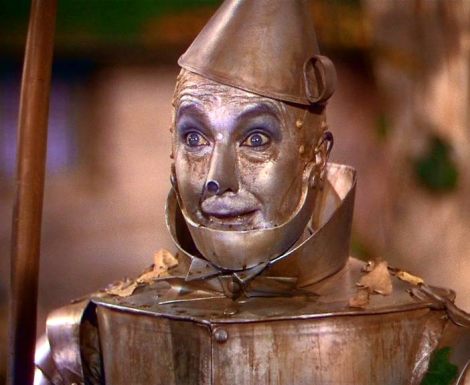 It’s just a skin condition, stop the body-shaming. Healthy at any skin type.

Chuck scratched his chin, his fingers sliding against his skin with a harsh metallic scrape. The doctor continued staring at him, his face locked in a dumbfounded expression, as if someone had just told him his vegetarian wrap was actually made with chicken and carefully flayed orphan.

“No, I don’t think that’s possible,” Chuck said, lowering his hand back down to his side.

“I didn’t think it was possible, either, but it’s pretty obvious,” the doctor said, regaining his facial composure. “I mean, look at your skin for example.”

“What about it?” Chuck said, glancing down at his bare arm. It seemed the same as it always did: silver, metallic, and relatively reflective—at least in the parts that he’d polished in the shower earlier. As far as Chuck could tell, it looked about as normal as it did on the next guy.

“It’s metal,” the doctor said. He lifted his clipboard and softly tapped on Chuck’s shoulder, his skin responding with a metallic clink. He’d heard the same sound before his shower that morning, after accidentally kicking the wall next to his tub. Technically he never even went into the shower—nor did he ever. He simply turned it on, stood next to it, and waited ten minutes as he polished his skin with a steel sponge. He found that he tended to get electrocuted if he actually went under the water. He didn’t think that any level of cleanliness was worth the mild discomfort of having electricity surge through his body.

“It is?” Chuck said. Now that he thought about it, perhaps his skin wasn’t as normal as it was on the next guy. For starters, the next guy—in this case the doctor—had pale, squishy skin. Chuck’s was hard, heavy, and made in a factory down in Detroit. It was subtle, but the differences were there.

“Yes,” the doctor said. He scribbled something in his notebook. “This is the first time you’ve seen a doctor for your condition?”

“Yeah,” Chuck said. “I never really thought I needed to.”

“You thought being silver was normal?” the doctor said, scribbling something else in his notebook. Chuck wasn’t quite sure where he was going with this.

“Yeah?” Chuck said, tilting his head sideways. “Obviously. Haven’t you ever seen The Wizard of Oz? The guy looking for a heart, he’s clearly silver.”

“Why would you base any judgments about normality on a movie featuring an anthropomorphic lion, a tin man, a scarecrow, and an army of flying monkeys? In fact, the tin man isn’t even a human. He’s made of tin and literally has no heart.”

“I see,” Chuck said. The doctor did have a pretty compelling argument. “So what are you saying about me, then?”

“I’m saying you’re not human,” the doctor said. He folded the front page of his clipboard over and placed it down on the examination table.

“No, I still don’t think that’s possible. I feel human. I’ve been human for as long as I can remember.”

“And how long, exactly, can you remember?” the doctor said.

“I don’t know, about two years.” Chuck closed his eyes and thought back to his first memory, his mother and father standing over him, socket wrench in hand as they tightened the bolt directly in the middle of his forehead. The went out to TGI Fridays afterwards and shared an onion soup. Well, they had an onion soup, he watched.

“And that isn’t weird to you? That you’ve only got two years of memory, yet think and act as if you were a 20-something-year-old man?”

Chuck shrugged. He’d never really thought of that as an issue.

“When was the last time you saw a two-year-old schedule a doctor appointment on his own?”

“Last week,” Chuck said. He hadn’t actually seen that, but he was beginning to feel a little cornered. Having some sort of company, even in the form of an imaginary toddler with astoundingly advanced scheduling abilities, helped.

“You saw a two-year-old schedule a doctor’s appointment last week?” the doctor said, lifting his eyebrows.

“I don’t believe you. But look, it doesn’t matter. I don’t know how else to explain this. You have no pulse, you have no heart, you have no sense of taste. Or touch. Or smell. For all intents and purposes, you are a robot.”

Chuck shook his head. “Not possible.”

“Normally I would agree with you, but the fact that you’re standing in front of me makes that a little difficult.” The doctor walked over to the door of his office and opened it. “Now I hate to do this, but I think we’ve gone back and forth long enough. To be perfectly honest, this whole thing is making me very uncomfortable. I’ve never met a robot that thought it was human, nor a human that thought it was a robot, and I am not entirely sure how to handle this ordeal. If I were to be completely frank, I am actually on the verge of a psychological breakdown. My secretary will see you out.”

Chuck stared at the doctor, then slowly began rolling toward the open door. It was a lot to take in, but he was pretty sure the doctor had no idea what he was talking about. In fact, he had literally just said he wasn’t exactly in the right mental state. He was clearly wrong, there was no way he was a robot. He had eyes, and a chin, and a series of circuits that somewhat resembled a circulatory system. Robots only had one of those things, not all three. There was no way.

“Thank you for your time,” Chuck said, nodding toward the doctor. He stopped and spun his torso so that he was facing the doctor, his legs remaining in the opposite direction toward the front door. “I think I am going to get a second opinion.”

The doctor stared at Chuck, his eyes wide and face locked in an expression of utter disbelief, as if someone had just told him Santa Clause did exist, but he was actually a rather large house cat with a long history of petty theft and child abuse.

2 responses to “Chuck Is Definitely Not a Robot”