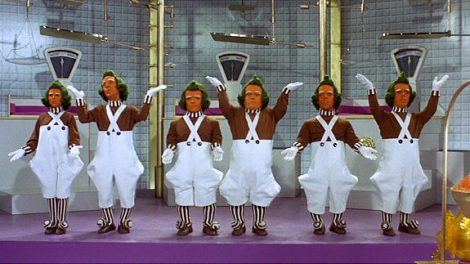 Oompa Loompas: The skinheads-with-green-hair of the candy world.

Chuck stared at the massive box of individually packaged candy on the table next to him. He’d been undercover for almost six months now, countless hours spent in the factory, his evenings filled with the monotony of adding page after page to his never ending report. It had been a dead end until now, a constant reminder that maybe they weren’t up to anything else after the death of Charlie. Typical “low risk” investigation, the senior agents explained. He’d thought of quitting so many times, of just walking out, telling the Deputy to go fuck himself, and finding a new job. He was finally glad he hadn’t.

Chuck adjusted the overhead lamp so that its light shone directly into the eyes of the Oompa Loompa in front of him. Twinkle, they called him. A real asshole—mocked him for his size and stature, for not being like the others, since he first started working at the factory—but exactly the asshole Chuck had been waiting all night to catch. Twinkles had been right to be suspicious, but now it was Chuck’s turn to do the tormenting.

“I knew you were a fucking pig,” Twinkles said, spitting at Chuck but missing. “I fucking knew it.”

“What gave me away,” Chuck said, admiring the ropes that held Twinkle’s tiny body to the small, metal chair. He was the first person—or thing—he’d ever tied up since graduating the academy a year ago, and he thought he’d done a damn good job. Any tighter and Twinkle would have started turning blue—or whatever the hell color Oompa Loomps turned when they were being asphyxiated. It certainly wasn’t a bad for a rookie agent.

“It’s the way you carry yourself, it reeks of pig. Also, you’re six feet tall, pale skinned, and not a dwarf.”

“Guess you were the only one who figured it out,” Chuck laughed. “If only you were more liked by your little friends.”

“And your aim is shit,” Chuck said, staring down at Twinkles. He was definitely one of the ugliest Loompas at the factory, his skin a disturbingly bright orange. The green, wig-like mess that made up his pathetic excuse for hair had always made Chuck feel uncomfortable, as if he were looking at an animal in its death throes. He wanted to put it out of its misery, to buzz it off and throw it into the massive, chocolate waterfall in the center of the room, but felt bad for the waterfall.

“Screw you,” Twinkles said, struggling to break free from the ropes that bound his arms, legs, and chest. “I’m going to fucking kill you when I get out.”

“Looks like you’re in quite a bind, though,” Chuck said, laughing. “Maybe I’ll throw you a rope when my backup arrives to take you and your pals down.”

Chuck had gone by the name Sparkles while undercover, a deeply traditional Oompa Loompa name as he’d been told. Research and Development explained that it would fit his stature well, as it was a name passed down to the largest of the Loompas. They tended to be no taller than four feet, though. Chuck stood a healthy six foot two, which had initially posed as an issue back in the planning stages. However, after discovering that Oompa Loompas passed down their heritage through their mothers—much like Jewish people—Chuck argued he could rely on simply being a Halfling. To his surprise, the department agreed to let him take the mission. It went flawlessly; the other Oompa Loompas bought into his excuse almost immediately, believing that his mother was an Oompa and his father was a human with a sweet tooth.

“I don’t care what your name is, I’m going to fucking murder you,” Twinkles said, his tiny, orange face wrinkling as he spoke. If it wasn’t for his terrible language, horrible body odor, mild racism, and general negativity, he was actually kind of cute—like a puppy that had accidentally murdered multiple babies.

“I’m sure you would, but it looks like you’re a little tied up,” Chuck said. He had spent the afternoon researching and rehearsing numerous puns and wanted to make sure he was able to fit them all in. “Maybe you should—“

“What the hell is going on in here?” said a tiny, high-pitched voice from behind Chuck. He turned around. A small man in an adorably tiny, blue uniform stood on the green gumdrop hills in the far corner of the Chocolate Jungle. He held a flashlight in his hand, its beam pointed at Twinkles. It was a member of the Night Watch. While they were far from the smartest Oompa Loompas in the chocolate factory—thus their job on the often mocked security team—they were arguably the most deadly. Or at least deadly-esque.

“Am not,” Chuck said, somewhat panicked. This was his first real cover-breaking moment; he realized now that he had spent way too much time preparing puns and not enough time working on ways to defend himself. For starters, he should have brought a weapon along on the bust.

“Do you think I tied my own damn self up?”

“I am not a cop,” Chuck repeated, eyes darting around the room. Backup was supposed to be here by now, they should have crashed through the candy-glass ceiling on ropes made of wool—not licorice—and started busting skulls open. Yet he was alone with Twinkles and Hugsy.

Hugsy pointed his flashlight at Chuck and slowly began his way over. Chuck knew he could probably take him—in fact, it wouldn’t really be that hard. Sure, he was one of the more elite members of the Night Watch, but he was only about three feet tall, his arms no longer than Chuck’s shin bone. He could probably just punt him across the room if need be. He was virtually no threat.

“You a cop?” Hugsy said, reaching for something on his belt. Right, guns. Chuck had forgotten about how heavily armed the Oompa Loompas had become following the deaths of both Wonka and Charlie. Punting would probably be out of the question now.

“No,” Chuck said, backing away slowly. “I was just checking in on why Twinkles tied himself up.”

“I didn’t fucking tie myself up,” Twinkles said. “That doesn’t even make sense. How the shit would I tie my own hands behind my back?”

“That’s true,” Hugsy said. “But if Sparkles was a cop, why would he say he wasn’t? That would be lying.”

Hugsy was now just a few feet away, close enough to make out the contours of his old, wrinkled, orange face. Chuck had always assumed that elderly Oompa Loompas were put down at some point, but Hugsy was a direct contradiction to that idea.

Hugsy lifted his pistol and pointed it at Chuck.

“Are you a liar?” Hugsy said, unlocking the safety on his gun.

“No,” Chuck said. “I would never lie to you buddy. Why don’t you come over here so we can discuss.”

“Don’t you dare go over to him,” Twinkles said, rocking back and forth in his chair.

“Shut up,” Hugsy said. “Don’t tell me how to do my job.” He slowly walked over to Chuck, his gun pointed at roughly thigh-level.

“Now,” Chuck said, watching as he came within twelve inches of him, “why don’t we—” Chuck charged forward and launched his right leg outward, the sole of his foot making contact with Hugsy’s torso in a tremendous thump. Hugsy immediately launched backwards, his arms flailing wildly as he spiraled through the air, the pistol smacking against a nearby corner of the room. His body landed somewhere in the shadows of the Chocolate Forest.

“Guess he didn’t see the real kicker,” Chuck said, laughing and turning toward Twinkles. His chair was empty, the ropes cut and limp on the ground. Chuck froze, carefully scanning the room for movement, before backing up so that he was flush against the rock candy wall behind him. He wasn’t exactly scared, there wasn’t much Twinkles could do given his tiny stature, but he wanted to make sure he didn’t get the jump on him. If need be, Chuck knew he could probably punt him across the room as well.

“Hey, asshole,” Twinkles said from behind Chuck. He turned around and stared at the tiny silhouette, its arm outstretched toward Chuck. Right, Hugsy’s gun. He always forgot about guns. “Sit the fuck down in that chair.”

Chuck nodded and turned toward the chair Twinkles had been tied to, then sat down.

“Grab the ropes,” Twinkles said. Chuck picked up the ropes. “Now tie yourself up.”

“I’m not a cop, why don’t you come here so we can talk about it?” Chuck said. A high pitched electronic sound echoed softly through the room.

“Do you think I’m as fucking retarded as Hugsy?” Twinkles said. It had crossed his mind, but apparently wasn’t the case. “I knew you were a cop from the first day you got here, knew you would try to shut down what I’d worked so hard to create. Charlie and Wonka never ran this place the way it was meant to, they gave away too much shit for free. I changed that, and I knew you were going to try to shut me down. I said to fucking tie yourself up.”

“Because I’m not the one who is about to get fucked.”

“What do you—” Twinkles erupted into spasms, his body falling to the floor violently as it seized. A man in a black suit hung from a rope just above him, night vision goggles strapped to his face, with several others slowly descending from the ceiling above. Chuck stood up and walked over to Twinkle’s twitching body, his eyes wide open as arcs of blue light slithered across his back.

“You’re under arrest,” Chuck said, “charged with the illegal distribution of candy with the ‘Not for Individual Resale’ sticker on it. You and the rest of you pathetic Oompa Loompas. Charlie would be ashamed if he were alive to see what happened to his Chocolate Factory. Those candies were meant to be free, not sold for illegal profit.”

“F-fuck y-y-you,” Twinkle muttered between spasms, his eyes growing bloodshot as electricity surged through his body.

“Oh, and this might come as a shock to you,” Chuck said, “but I was an FBI agent the whole time. Electrifying, isn’t it?”