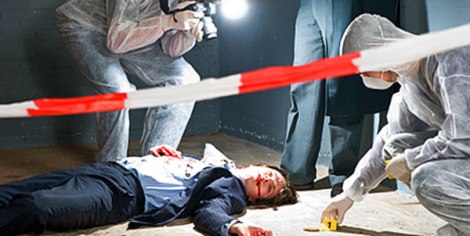 “Looks like he probably bit his own tongue so hard he died. Case closed.”

“I don’t think this was an accident,” Detective Greene said, staring down at the body, its torso half covered in a blue tarp. It had clearly been laying there for a while, the visible portions of its skin already showing signs of decomposition.

“Why’s that?” Chuck said, kneeling down closer to the body. It smelled like foul play, and also like fish that had been left out in the sun for significantly longer than it should have been. Chuck tilted his head. Why would anyone leave fish out in the sun? It didn’t make any sense.

“Look,” Greene said, pointing to the corpse, “it has no head.”

He was right. The shoulders connected to the neck, and then simply stopped. That was not how the song he’d learned in elementary school went at all. The neck bone connected to the head bone. He was sure of it.

“My god,” Chuck said, gently waving his hand back and forth through the empty space where the head should have been, “you’re right. There’s nothing here.”

“See?” Greene said, contorting his face into an “I told you so” expression.

“Still,” Chuck said, “isn’t it possible he did this to himself?” He’d once read somewhere that people can live for up to ten minutes without their heads. Or perhaps that was chickens. Regardless, Chuck was fairly confident that chickens and humans shared a lot of similar characteristics. It didn’t really matter which type of animal the fact had originally been about, it likely applied to both.

“Completely cut off his own head and moved it several feet away?” Greene said, nodding toward the beaten and disembodied head laying upright on the table almost ten feet away.

“Yes,” Chuck said. He thought his question had been pretty clear.

“Maybe,” Greene said, nodding slowly, “but, check this out.” He stood up and took a few steps forward, his navy blue NYPD blazer hanging over his shoulder, then stopped beside the table holding the head. He picked something up off of it, twisting his long, thin arms as he reached, and wandered back.

“What is it?” Chuck said, leaning closer to Greene and noting that he smelled significantly less like sunburnt fish.

“I think it’s a weapon,” he said, thrusting his palm toward Chuck. A large, black pistol lay in it, blood speckled across its barrel like a Jackson Pollock.

“Are you sure?” Chuck said, grabbing the pistol and caressing the handle with his fingers and palm. It felt nice to the touch, surprisingly heavy yet well balanced. He lifted it up and peered through its sites, pointing the blood-splattered barrel right at Greene’s face.

“Yeah,” Greene said, staring into the barrel of the gun. “I’m pretty sure it’s a firearm.”

“Wait a moment,” Chuck said, lowering the gun back down and instead pointing it at his own head, studying it carefully with his eyes. “I think this might be mine.” His service pistol was black, just like this one; it wasn’t unlikely that he’d accidentally left it next to a severed head. He reached down to his duty belt and felt for his holster, his hands wrapping around the outline of his Glock. He unlatched it and pulled the gun out, placing it in his hand next to the pistol Greene had found.

“Well?” Detective Greene said. “Is it yours?”

“No,” Chuck said. “False alarm. Looks like I still have mine.” He returned the blood-splattered pistol to his holster, tossing the clean, police-issue Glock into a pool of blood beside the body.

“I think we’re dealing with a murder here,” Greene said, leaning toward the corpse and appearing to examine the neck-gash that once connected to a head.

“I’m still not convinced it wasn’t an accident.”

Greene straightened his back and stared up at Chuck, still knelt down beside the body. It was strange having Greene looking up at him for once, it was usually the other way around. Chuck was almost six inches shorter than Greene’s impressive six-foot-six height. He desperately hoped Greene was about to ask him “how the weather was up there,” but knew it wasn’t likely.

“Just to confirm,” Greene said, while inadvertently crushing Chuck’s hope and spirit, “you think that this man cut off his own head, then propped it up on a table several feet away, before falling on the ground and dying?”

“Yes,” Chuck said. “I’ve seen almost this exact thing once before.” Technically, what he’d seen was a man accidentally cut off his own arm and leave it lying on the ground, but it was pretty much the same thing.

Greene shrugged. “You might be right,” he said. “Still, it is slightly more likely that we’re dealing with a murder.”

“I guess,” Chuck nodded. “So how do you think it went down?”

“Pretty obvious,” Greene said. “Clearly, someone found this poor guy and shot him in the neck until his head fell off. Then they put his head on a table and called it a day. They probably went to get some pizza or something afterwards.”

“Honestly,” Chuck said, tilting his head to the side, “that does make sense now that I think about it. This might not be an accident after all.”

He knelt down and stared at the corpse, its expression motionless and empty. It was staring off to the right slightly, eyes locked on a similar blue tarp. A pool of burgundy liquid was puddled beneath, several small, bullet-like holes punctured into it. A rusted, blood-covered saw lay beside it, a stream of partially dry blood leading back to the beheaded corpse. Chuck knew it was probably nothing, there were a ton of tarps in this abandoned basement. It was likely some sort of tarp storage room.

“So we’re going with murder?”

“Yeah, I think so,” Chuck said. Sure, it was still possible the man had beheaded himself, but it was more likely that someone had shot off his head and then gone to get pizza. The simplest solution was usually the right one.

“Great, case close. We’ll radio for teams to hit every single pizza restaurant in New York,” Greene said. He paused and glanced over at the exit. “Last one back to the car has to do the paperwork,” he shouted, turning and running toward the door.

“Not fair,” Chuck shouted, standing up and chasing after Greene. “Wait for me!” He pulled out his pistol and began blindly firing in a futile attempt to convince Greene to slow down.