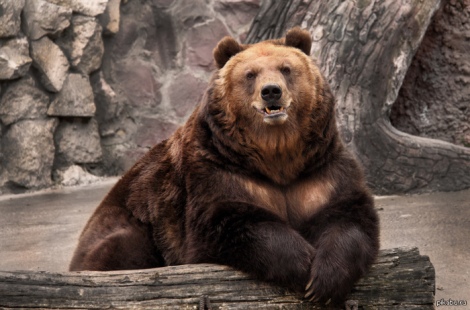 “Hey guy, you want to come over to my place and do bear stuff together?”

Dave knelt down and grabbed a handful of mud, smearing it across his face while choking slightly on a tuft of arm hair that flooded into his completely closed mouth. It didn’t matter how hard he tried to keep it out of his various orifices, it always found its way in. He was, without a doubt, incredibly hairy, almost to the point of it being simply terrifying: parents hid their children and adults hid their parents. Those that didn’t fear him simply stared in complete and utter disbelief. Hardly a day went by in which he wasn’t called “Cousin It” or mistaken for the clippings beneath the chair of an unbelievably busy barber shop. Regardless, though, he hadn’t let it get in the way of his career, and was now on one of the most important—and dumbest—missions of his military life.

They told him he’d be dropped off just outside Putin’s compound, that he’d be left in the forest beside it in the complete nude. He would then infiltrate his way into the mansion, find the Russian president, and befriend him. It seemed to make sense, up until the part that they sat him down to explain. They told him that he had been specially chosen for this mission, but not because of his fluency in Russian or years as a Special Forces officer, nor for his dozens of confirmed kills and six tours of duty. He had been chosen specifically, and almost entirely, due to his hair.

“I’m sorry?” Dave had said, coughing on one of the hundreds of strands of hair that had become eternally caught in his throat.

“It’s because of your hair, that is why we need you.” The general stared at him, his perpetually stern face looking as though it would lash out and bite into his jugular at any moment. Dave knew better than to talk back, but he had so many questions.

“Mr. Putin has a great fondness for bears. We have a great fondness for learning about what he knows. Obviously, we can’t train a bear to walk into his compound and feed us information. There are so many things wrong with that scenario: bears are dangerous, bears don’t speak English, and bears tend to have an affinity toward the Russians. So, we need you.”

“Your hair,” the general repeated. “We need you for your hair, and your insane likeness to an overly hairy bear.”

For the first time in Dave’s military career, he attempted to argue against the mission. He tried to tell the general that what he was saying was not only insane, but incredibly implausible. He looked nothing like a bear. Yes, he was basically a walking tuft of hair with two feet poking out at the bottom, but bears were less hairy than he. They didn’t carry weapons, they didn’t kill terrorists. They killed hikers and ate honey. Dave didn’t even remotely like honey. Still, the decision was not up to him. He was shipped off to Russia the following morning and dropped into the forest in the nude.

Dave had a few hours to think up a plan while flying overseas, at least during the few moments he didn’t attempt to catch what he assumed were the last few moments of sleep he’d ever have. Even if he did get into Putin’s compound, then what? He’d surely realize he was a bear, surely figure out that he was a six-foot-seven American soldier. Then he’d be killed. It was an important mission, the first time the government had tried to spy on Putin at such an intimate level, but it just seemed so dumb. Whatever the case, the only plan he’d come up with was to get in, try to get at least a little bit of intel, and then get the hell out. That changed the moment he landed, however, the moment he saw Putin and several guards hunting just beside where he’d parachuted in.

They were no more than ten yards away from Dave’s hairy perch, Putin dressed in forest camouflage pants and dark green boots, his torso bare and shirtless. He carried some sort of a Russian-made hunting rifle coated in goal. It didn’t appear to be a high enough caliber to take out a bear, but Dave was not a bear. He was a human. It would definitely be strong enough to kill him. He was incredibly susceptible to bullets.

He watched as they silently stalked through the forest, listening to them as they spoke to each other in Russian. They were talking about the “American scum,” calling them animals that needed to be purged from the Earth. He remained flat against the ground, simply a black ball of hair amidst a sea of emerald trees.

“What’s that?” Putin said, stopping. He toward Dave and pointed, handing is rifle to the man next to him.

“I think it’s steel wool,” said one of the Russian guards. “Or maybe it’s a sea urchin.”

“No,” Putin said, taking a step toward Dave. “That’s a bear. That is definitely a bear.”

“Are you sure?” said one of the other guards. “I think it might be a sack of hair.”

“No,” Putin said, taking another step and smiling. He bent down and placed his hands on his knees, making a soft kissing sound as if he were trying to get a kitten’s attention. “That’s a bear.”

Dave stared at Putin, watching as he slowly made his way over. There was no way he was that dumb, there was no way he wasn’t actually on a suicide mission. He’d spent so long trying to figure out why the government would send him to die at the hands of Putin, but couldn’t figure it out.

Sighing heavily, Dave took a step out from behind the tree. He was ready to die, and figured it would be best to get it out of the way now rather than later.

“Who’s a cute little guy?” Putin said, pursing his lips together and again kissing the air several times. He waved at Dave, the fat on his bare torso flapping slightly as his arm flailed.

Dave let off a low growl, doing his best to impersonate a bear that was definitely not an outrageously hair American soldier. He was pretty sure that growling was the way to do that.

“You are,” Putin said, now less than three feet away. “You want to come live with Uncle Vladi-bear?”

Dave tilted his head and stared at Putin. He appreciated the bear pun, but knew it was all some sort of a game. He was probably going to reach for a gun and shoot him in the head any minute now. That was it. No way could Putin be this dumb.

“You want to come and be my wittle pal?” Putin said. He was now just inches from Dave’s hair-covered body, close enough to reach out and slap Putin across the face if he’d had a death wish. “I have lots of food and space, we can be best pals.”

“Yes,” Dave said in Russian, then froze. He’d forgotten he was supposed to be a bear, forgotten he wasn’t just a hairy man sent to spy on the Russian President. He was surely dead now, even if he somehow wasn’t already.

“Great,” Putin said, smiling and reaching out for Dave, as if it were entirely normal that a bear had just responded to his question in the affirmative. Putin wrapped his hands around Dave and gave him a hug. “Bear hug!”

With a soft growl, Dave placed his head against the small of Putin’s neck and closed his eyes. He had no idea what in the hell was going on, nor did he quite understand why Putin was currently hugging him. He’d thought the mission was insane, thought he’d surely be dead by now. Yet, instead, he was in the arms of Putin, his incredibly hair chest pressed up against Putin’s own. Apparently he had been wrong on two fronts: not only did he actually resemble a bear more than he’d given himself credit for, but apparently the mission had been less suicidal and insane than he’d originally thought.

Putin softly pulled himself away from the hug, then reached down and grabbed Dave’s hand. It was buried beneath a sea of brown, curly hair, and presumably felt like what Dave assumed a bear’s hand might—or at least he hoped that was the case. Putin seemed not to notice the fact that he had four fingers and a thumb, but instead began pulling him toward the compound Dave knew to be just beyond the trees. He silently followed, watching from within his mess of hair as Putin began singing an incredibly high-pitched Russian song about how much fun the two of them would have.