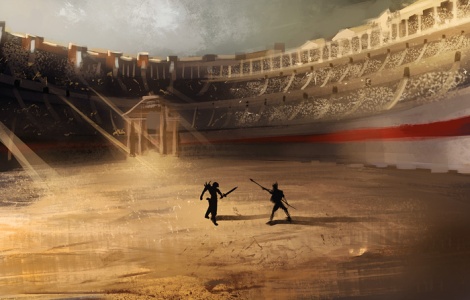 Believe it or not, I used to be a gladiator when I was a child. Well, not really. At all.

Chuck stared at the man in the center of the arena, a long, blood-soaked sword clutched in his undeniably masculine grip. Everything about him screamed manly: from the tufts of black, curly hair poking out of his chest plate, to the way his deep voice reverberated around the stone coliseum, to the mustache clearly situated just beneath his abnormally pink nose and large black glasses. There was absolutely no doubt in Chuck’s mind that he was staring at a man.

“That’s not a man,” Lucy said, sighing and falling back down into the throne behind her. “That’s Carol, she’s wearing glasses with a fake mustache attached. You can clearly tell it’s our daughter.”

“You’re out of your mind,” Chuck said, leaning over the railing and staring down into the blood-soaked arena. Bodies lay strewn across the amber sand, limbs detached and scattered about. He took a deep breath, held it, and then exhaled, his heart racing. He loved watching the men fight for his daughter’s hand in marriage, throwing their lives on the line for a chance to become her husband. Unfortunately, though, the process had been taking quite a bit longer than he’d anticipated. Despite his requests, his scoldings, and his threats, his daughter continued to disguise herself as a man and enter into the competitions, winning each and every time. This was now the seventh tournament in what was quickly becoming a monthly occurrence, but Chuck new they’d finally found a victor. In fact, he was probably even named Victor.

“No,” Lucy said, “that’s definitely Carol. The hair on her chest is obviously fake, you can see a bunch of it on the floor behind her.”

“What?” Chuck said, glancing over at the gladiator. He was absolutely masculine, right down to the lack of an Adam’s apple—which Chuck assumed was reserved for the most manly of men, those whom didn’t need such anatomical features to have lower voices. Still, Lucy was right. A trail of black, puffy hair lined the area just behind the gladiator, like balls of fur on parade. It was probably a coincidence, though. In fact, he was pretty sure they’d always been there. “You’re insane, Lucy. Please shut your mouth.”

“Look,” Lucy said, standing up and walking to the ledge beside Chuck, “Carol is picking up the hair and stuffing it back into her chestplate. What kind of a person does that? Has hair that detaches and needs to be reapplied?”

Chuck watched as the gladiator subtly walked backward and bent down to pick up each ball of fuzz, shoving it into his chest plate and glancing around as if checking to see if anybody was watching. Of course people were watching, though—they were in the middle of a two-thousand-person coliseum, the crowd cheering almost violently for their winner. Whatever the case, however, Chuck knew he was definitely looking at a man. He probably just suffered from a sudden case of Alopecia and needed to make sure he re-gathered all of his chest hair. Heck, that had happened to Chuck on at least one occasion as he recalled.

“That’s normal,” Chuck said, turning toward Lucy and shaking his head. “He’s just got a disease. That’s definitely a man. Do you see his pants? Only men wear pants.”

“Women can wear pants,” Lucy said, again sighing. “They simply have to put them on their legs.”

“Wrong,” Chuck said, turning around and facing the crowd. He lifted his hands in the air and waved, the audience responding with a tremendous roar. “When was the last time you saw a woman wearing pants,” he said, turning back toward Lucy.

“I don’t know,” Lucy said, now almost shouting through the din of the crowd, “but it’s not impossible. They just slide them on and they’re wearing pants.”

“You’re speaking gibberish,” Chuck said, lowering his hand and pointing down at the manly gladiator in the center of the arena. He was now rubbing the blood off his sword, his mustache slightly lower on his face than before. That was normal, mustache movement. He’d was pretty sure he’d read about it in a book, a terrible condition in which the hair above one’s lip occasionally slid down an inch or two. “Women don’t wear pants. That’s a man.”

“Whatever,” Lucy said, again sitting back into her chair and picking up the book that sat on the table beside her throne.

“You,” Chuck shouted to the gladiator, his finger still pointed at the masculine figure. “You are the winner, the ultimate fighter. You have won my daughter’s hand in marriage. What is your name?”

The gladiator stared up at Chuck and opened his mouth, his mustache—including his nose and glasses—abruptly sliding off of his face and down into the orange dirt below. He stared at Chuck for a split second before collapsing to his knees and blindly grabbing at his fallen mustache, finally shoving it onto his face. Chuck looked away for a moment in an attempt to give the man some privacy while he mended his troubles. He knew that if his own nose, mustache, and glasses all fell off at once, he’d like a few seconds to gather himself. Thankfully, though, he had no mustache and thus did not suffer the terrible ailment.

“Did you see that?” Lucy said from behind Chuck. “Her fake mustache literally fell off.”

“Please,” Chuck shouted, turning toward Lucy. She was so inconsiderate. “The man is suffering from a terrible disease, do not mock him.” He turned back to the gladiator. “Your name?” he reiterated.

“Steve,” the gladiator said, still adjusting his nose and mustache. They were slightly crooked now. “Steve A. Man.”

“Thanks,” Steve said, glancing at the audience surrounding him. “I’d like to decline the offer, though.”

“What?” Chuck said, tilting his head, eyes still locked down at Steve. He had been quite looking forward to having him as a son-in-law, not to mention the incredibly masculine offspring he and Carol would’ve produced. Yes, Steve’s jaw line was a tad feminine, and his long golden hair wasn’t exactly the most manly thing in the world, and his breasts were a smidge larger than average, but Chuck was sure they’d make great sons to take his place at the throne. He had so many great, manly features, like his chest hair and his unfortunately mobile mustache. “Why?”

“Because I’d like to instead request that you stop making men kill themselves for your daughter’s hand in marriage. Rather, let her choose her own husband.”

“Hang on, really?” Chuck said, lifting his hand to his chin and scratching it. “Like, not dictate who she marries? But she’s a woman, I don’t think she can handle such responsibilities.”

“That’s exactly what I mean, and I’m sure she can,” Steve said, shifting slightly, his sword hanging from his right hand, a few puffs of black hair still clutched in his left.

“Well,” Chuck said, exhaling. The thought of forcing a woman to make her own decisions was a bit unappealing to him, almost a bit unfair to her. They seemed to so enjoy having their lives dictated on their behalf, being told who to marry and what to wear. He didn’t want to be cruel to Carol. Still, the man before him was clearly an intelligent, strong, masculine being. Someone of such stature clearly knew a thing or two. Plus, the idea of throwing another tournament wasn’t exactly too appealing. It just meant Carol would have another chance to sneak by his keen watch and slip into the competition. There was no way he’d let that happen again. “Okay, fine. You’ve got yourself a deal. As the winner of the competition, I’ll listen to your request and allow Carol to make her own choice in a husband.”

“Really?” Steve said, readjusting his nose. “Great. Then, I must be off. I need to go pee standing up.” He turned and began walking toward the gated entryway to the arena, the steel bars slowly lifting as several small, skinny men pulled on the rope beside them.

Chuck turned back toward Lucy and smiled at her. Her eyes were wide, head tilted almost as if in disbelief. She was clearly amazed at how well he got along with men who had proven themselves in combat.

“See,” Chuck said, sitting down in the throne beside Lucy, “I told you that was a man. Good guy, too. I might invite him over for dinner soon.”

“You were right,” Lucy said, laughing softly. “You were absolutely right.”