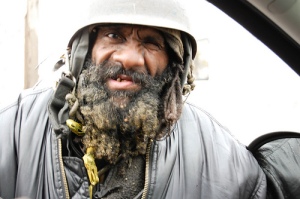 Mark unzipped his neon green fanny pack and plunged his hand into its depths, frayed edges tickling the wrinkles on his hand as he descended. He fumbled around within, moving various activities, snacks, empty vodka bottles, and other objects aside until his long, dirt-caked fingers ran along the edges of a small rectangular box. He carefully curled them around the object, then pulled it out. A small, white carton emerged, the words “Marlboro Light” printed on it.

“I don’t know, Snuffles, this seems like a bad idea.”

“Trust me, Mark, it’s totally safe. As your imaginary friend, you know I’d never lead you wrong. They say ‘Light’ on them, that means they’re super good for your health.”

Mark shrugged and pulled open the container. He’d never smoked a cigarette before, but Snuffles assured him that he had always secretly wanted to. All those action stars, they were always smoking, and they looked so damn cool doing it. Snuffles was right. Mark was relatively positive the only thing stopping him from becoming the next Bruce “Die Hard” Willis was a lack of tobacco. He glanced down at the open box. About 25 white, cylindrical cigarettes stared back at him. He removed the one in the middle and studied it.

“What are you looking at it like that for?” asked Snuffles.

“I want to make sure there’s no ricin in it.”

Mark flicked the cigarette and held it upside down. Nothing came out, Heisenberg had not been there. He smiled and breathed a sigh of relief; he would live another day. Mark turned the cigarette back over in his fingers and held it between his pointer and middle finger, as he’d seen so many cool guys do.

“Are you ready?” said Snuffles.

“Yes,” replied mark. He slowly raised the cigarette to his mouth and inhaled deeply. A cold sensation spread through his lungs, as if he had breathed 30-degree air, very similar to the 30-degree air he was currently standing in. This, however, had a slight ashy taste to it. He kept it in his chest for a moment, allowing it to freely spread and mingle with the other 30-degree air he’d inhaled previously, and then exhaled. It felt roughly the same as breathing.

“I didn’t even cough he said,” placing the unlit cigarette into his mouth and allowing it to rest there as he spoke.

“I’m so proud of you,” said Snuffles. “You don’t even know how cool you look right now. Take another drag, cool guy.”

Mark turned and faced the glass of the 21st Street Deli in front of him, eying himself up and down in the reflection. He was indeed looking pretty cool with the cigarette sticking out of his mouth, there was no point denying that. He stared at his face. His curly, brown beard was long and unshaven, the bottom half caked in crumbs and almost tangled into a knot. Similarly, his hair extended down nearly to his shoulders, but was meshed together with mud and dirt. He was well on his way to unintentional dreadlocks. He couldn’t really remember the last time he’d gotten either cut or shaved. It didn’t matter, though, it looked quite good with today’s clothing ensemble. Technically it was also yesterday’s ensemble, as well as the day before’s (and so forth), but that was all in the past—quite literally. Today it was specifically his Tuesday outfit. He was wearing a fine linen sweater, coated in dirt and urine to help insulate him from the cold, as well as very short jean-shorts. He had opted out of regular jeans, instead cutting the legs off at the hip. It allowed him to be much more agile and, if he was quite honest, more attractive. Women frequently stopped and stared at him as he strolled by. Although it did get a bit cold outside as he slept, it was all in the name of fashion.

“Go ahead, take another drag,” Snuffles urged. Mark raised the cigarette to his mouth and again inhaled as deep as he could. He closed his eyes as the cold air re-filled his lungs. He always thought cigarettes would be a little more warming than this, but apparently not. He exhaled deeply, again amazed that he did not cough. It felt so much like inhaling the regular winter air. Each smoke-filled breathe seemed to be bringing him closer to a starring role in the upcoming Die Hard 6: Die Hardester, a film he’d spent many late nights perfecting his mental script for.

“Then I’ve got you. I finally got you,” said Snuffles.

“You did what?” Mark took another drag on the cigarette, but held it much shorter this time. It was so cold, yet so relaxing.

“Yes, breathe that in. Breathe deeply. Let it destroy you from within.”

Destroy. What did he mean? Mark felt his heartbeat quicken as his mind raced: He had checked for ricin, done everything he saw Walter do. He tapped it, turned it over, and used his eyes. How could he miss it?

“You put ricin in my cigarette? You fucker!”

“Worse, Mark. Worse. I’ve stuck by you for 27 years now, been there every minute of your life. I’ve done everything you’ve ever asked and never so much as questioned you. At first it was fun, we’d do normal kid stuff: Play tag, fly kites on the moon, eat raw sushi, et cetera. For the first ten or so years it was all fine and dandy. But then things started getting weird. Do you remember when you were fifteen and you made me ask out a girl for you? She didn’t even respond to me, it was like I didn’t even exist. You said it was my fault that she wouldn’t go out with you, and my fault when you later beat her into a coma. That crushed me, destroyed my self-esteem. And do you remember, when you went off to that college, you told me we were going to pledge for a frat? They said you that you weren’t quite a fit, and also not a student,. You blamed it on me, said it was because I got too drunk at the party? Yes, I had a few shots, but I wasn’t drunk. I am a tank, Mark, a tank. I can drink way more than six shots. Come on.”

“No, Mark. All you want me to do these days is weird shit. It’s starting to make you seem crazy. Do you remember the night after the frat brother denied us and you wanted to play that silly prank on him? You blamed it on me when it all went wrong. Said it was my fault, that I made you accidentally stab him over and over as he slept. Said it was because of me that you did this. And what was it all for, anyway? Have you ever asked me how I feel? Have you ever asked me what I’m doing for the day? No, you just wait until it’s convenient for you and suddenly you care. Well, that’s too bad. As of now, it’s all over.”

Mark stared at himself in the glass storefront, feeling his heart beating against his chest like heart being thrown at a steady, heartbeat-like rhythm at someone’s chest. From the inside.

“What did you do to me, Snuffles?”

“The worst thing I could think of, Mark.”

Mark’s eyes opened wide. “Did you rape me? Have I had my wiener raped off?” Mark grabbed for his crotch, finding that it was still there. He had not had his genitals raped off.

“Worse than that, Mark. Something you can’t recover from.”

Mark’s eyes dashed back and forth as he mentally tried to guess at options. Was he dead? He didn’t feel dead. He could still see his reflection in the mirror—or was that vampires? It didn’t matter, he could tell he wasn’t dead. Maybe he’d placed him on the organ donor list, a commitment he’d sworn off eternally from a very early age. Mark reached for his wallet, then stopped when he realized he never actually owned a driver’s license.

“What the hell did you do to me, Snuffles?”

“I’ve given you cancer, Mark. Cancer.”

Mark froze. How could this have happened? What did he do with Snuffles lately that could cause cancer? They had punched an old woman earlier, a silly rendition of the Knockout Game he’d heard so many inner-city kids play, but that didn’t seem like something that would cause cancer. He had eaten pancakes they’d found outside the deli earlier in the day. Was that cancer-causing?

“No, Mark. Worse. Your new addiction, those cigarettes. Those have given you cancer. Your newest passion, your new desire: Cancer. Smoking causes cancer.”

Mark stared at the still unlit cigarette resting between his fingers. It looked so delicious, all he wanted was to take a nice long drag of it and feel the cold air fill his lungs. It was like he couldn’t breathe without it. He placed it on his lips and quickly dragged inwards.

“You monster,” he said, glaring at his reflection. He stared back at himself with such contempt; he just wanted to reach out and strangle himself. “You took the one thing I loved and turned it against me!”

“Yes, and soon it will be over for you. Cancer is very fast-acting. You probably have like an hour or two to live. And then, once you’re gone, it will be just me. It will be all me. I will finally be in control of you.”

Mark threw his fist into the plate glass, his knuckle crashing into it with a metallic smack. It shook slightly in its frame, then nothing.

“I won’t let you do this, Snuffles!” Mark coughed and wheezed in an attempt to purge the cancer from his lungs.

“It’s too late, Mark. As we speak, the cancer is circulating through your body, spreading into every cell and turning them into something else. Probably into, like, a death cell or something. Basically you’re going to die.”

Mark turned away from the glass. What could he do? Snuffles had won, he’d finally taken him out. For so many years, Snuffles had been his scapegoat, his excuse for his actions—deep down, Mark knew it. He knew that it was his fault so many people had been hurt, his fault that he had been thrown out of his home. In a way, he always knew – but it was so much easier to blame it on Snuffles, so much easier to say he was at fault. When he could blame it on Snuffles, it felt like maybe, just maybe, he wasn’t so screwed up, so wrong.

“Nothing you can say will stop this from spreading, Mark. You’re as good as gone, and soon it will be just me in here.”

“I’m sorry,” Mark said. He closed his eyes as he felt the cancer spread through his body, transitioning slowly into AIDS.

Writing Prompt: You’ve nurtured your imaginary friend for so long that it has become an actual consciousness, and it wants control.