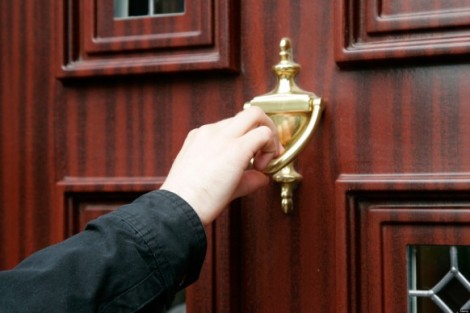 Always open the door for strangers. You don’t want to be rude.

“Hi,” the man at Chuck’s door said, closing his eyes as he slowly shook his head, his long, blonde hair flicking out across his face and landing behind his ear. He was clearly some sort of Mormon missionary or something, trying to grab Chuck’s attention through his insane sex appeal. Then again, that wasn’t exactly a practice Chuck could recall Mormons being known for. “Is Sarah home?” the man continued, placing his hand against the door frame at an angle, his right foot crossed under his left as he winked at Chuck.

“Who’s asking?” Chuck said, a folded newspaper tucked under his robe-covered arm. He wished he’d made a bit of an effort to clean up, so as to not look quite so middle aged. He knew the model-esque person standing in front of him was probably judging his brown, balding hair, or how his pale skin peeked out toward the crown of his head. He hadn’t even had the chance to shave, although he didn’t exactly expect to be face-to-face with a Thor-lookalike today.

“They call me Charming,” the man said, again shaking his head in slow motion, golden hair floating softly through the air. “Prince Charming.”

“Are you serious?” Chuck said, his head tilting slightly to the side as his eyes traveled up and down Prince Charming’s admittedly well-maintained, muscular body. God damn was he attractive, although he dressed a bit like a Disney prince—tight fitting black pants with gold lace, and what looked like a red matador’s jacket.

“Absolutely,” Charming said, bowing forward and revealing a man behind him that was fully dressed in what appeared to be era-appropriate medieval knight’s armor.

“Why is there a knight behind you?”

“I’m not just any knight,” said a muffled voice from behind Prince Charming, the knight stepping into view. His helmet completely covered his face, a long, silver sword clutched in his similarly armored hand. “I am the Knight in Shining Armor.”

Chuck stared at the knight and blinked. His armor was certainly shiny, Chuck’s tired, unshaven face reflecting back off his spotless chest plate, but he didn’t really see why it was important to distinguish himself through how well maintained his armor was. Chuck never went around addressing himself as “Chuck in Unwashed Bathrobe.” It was just weird.

“Riiiight,” Chuck said, holding the i for slightly too long as he stared at the knight in front of him. “You’re not going to rob me, are you?”

“Absolutely not,” Prince Charming laughed, his voice deep and soothing as he chuckled. If Chuck wasn’t relatively sure he was mainly heterosexual, there was no way he would have been able to prevent himself falling in love with the fine specimen in front of him. “We’re just here to speak with Sarah. Is she home?”

“She’s—” Chuck paused, a third figure catching his eye from just over the knight’s shoulder. “What the hell is that?”

“Hi,” said what appeared to be half of a person, standing on one foot, the left side of his body completely absent. It was as if he had been cut down the middle, yet was somehow still alive. “I’m Mr. Right.”

“What the fuck,” Chuck shrieked, taking a step back. “How are you alive? You’re missing literally the entire left half of your body.” The man seemed to be bleeding profusely from his center, a river of blood flowing down Chuck’s front porch and leading back to what he assumed to be the Dodge Caravan the three of them had arrived in.

Mr. Right shrugged, or at least seemed to shrug. It was hard to tell, considering he only had one side. Whatever the case, his right shoulder moved up wards for a moment, and then back down. Then again, it was entirely possible that he was simply suffering a small seizure due to the extreme blood loss he was suffering from.

“What the hell is going on,” Chuck said, reaching for the door and getting ready to slam it shut. It was too early in the morning for this.

“We’re here to propose to your daughter,” Prince Charming said, bowing slightly, his golden hair flipping over his head and toward the floor. “She gets to pick from the three of us: Prince Charming, The Knight in Shining Armor, or Mr. Right.”

“Why would she pick any of you? I mean, I understand why she’d pick you, Mr. Charming,” Chuck said, blushing, “but, why would she want a guy in armor? Or a guy missing half his body? Plus, she’s also a bit young for an arranged marriage.”

“What do you mean?” the knight said, opening his visor and revealing a terribly scarred and damaged face. “I’m a real catch.”

“Age is not important to me,” Mr. Right said. “I just want to find my true love, the woman we were told would make one of us eternally happy—and, of course, wealthy. I’m just here to show her that I’m Mr. Right. Get it?”

“Yes, okay, but my daughter is only six months old. And I assure you that we’re not exactly wealthy.” Chuck would gladly show them his bank information, which had arrived earlier that day. They were now dwindling on completely and utterly broke, but still had enough to afford either some food or a few lottery tickets. He knew which he was going to be stopping by the 711 later to get, and it certainly wasn’t edible.

“She’s still a newborn, I don’t think I should be letting her get married yet,” Chuck shrugged. “Well, not at least until I talk to my wife. She’ll be home in a few hours.”

“Are you kidding me?” the Knight said, throwing his hands up in the air, his armor crashing together tremendously. Sarah began crying from within the house, obviously woken up from her morning nap.

“Nope,” Chuck said. “Do you want to wait for my wife to get home? She has like, at least half of the say here. I can’t just give away our daughter without talking it through.”

“Absolutely not,” Prince Charming said, his hands falling down toward his side. “Great, I’m probably on some kind of a list now.”

“God damn fucking wizard lied to us,” the knight said. “I was going to be a god damn billionaire.”

“I can’t believe I cut myself in half for this bullshit,” Mr. Right said as he turned around and began hopping toward the car. “At least you guys don’t have to die because of some old, drunkards prank. This was such a bad idea in retrospect.”