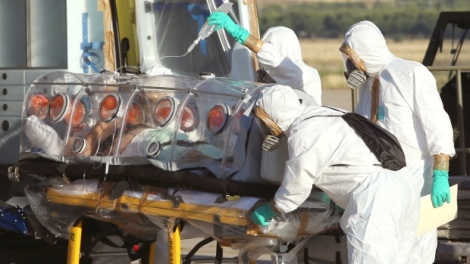 If this isn’t how you’re forced to leave the house each morning, you’re doing something wrong.

So you’ve gotten yourself a highly infectious, and potentially deadly, disease. Fantastic! That means you’re well on your way to living a life of luxury, celebrity, and quarantine, right? Not quite: it isn’t actually that easy. You see, many quasi-infectious people simply assume they can get ill and then call it a day. Not exactly. In fact, being in the top tier of the most infectious folks requires hard work, commitment, and, more than anything else, dedication. If you want to truly be the most virulent leader you can be, to be the person that CEOs, Presidents, and even world leaders look to avoid, then you need to put forth significant effort and truly make a name for yourself. That’s where I come in. Boasting my resume as the renowned patient zero for U.S. based Ebola, H1N1, H4N1, H5N1, Measles, and a not-yet-named acute Meningitis, I have made it my mission to support infectious-dreamers like yourself. So, without further ado, I present to you my official Seven Habits for Highly Infectious People.

So you’ve found yourself infected with an incredibly deadly strain the Ebola virus. Excellent, you’ve received one of the most coveted diseases there are. Millions of lives have been claimed by this most lethal ailment, and it has chosen you as its next valued customer. So how can you best take advantage of that? You must be proactive. Ebola is trusting you to help spread its legacy, and it is on you to fulfil that request. You must be different from the average under-achieving infectious folk, the ones that simply sit down in their bed and take a nap following diagnosis. If you truly want to be the infectious leader you know you can be, then it is crucial you be proactive. Go to the gym, sneeze on the barbell. Go get some ice cream and bleed inside the cones. Stop by the beach and vomit on anybody within a 10-foot radius. The moment you become ill, you must be proactive. Spread that disease and share it with the world. If you aren’t infecting others, then you’re simply not infectious.

Habit 2: Begin with the End in Mind

As you catch your first major illness, it’s important to remember that you’re probably going to die. Bearing that in mind, you will be able to act as if every day is your last (and it is quite likely that this is true). A truly infectious person will get out of their bed in the morning and embrace the day; they will scream “carpe diem” from the top of their burning lungs, while their neighbors flee in terror; they will welcome the sun with blood-filled eyes, march out that door, and throw caution to the wind. They know they’re going to die, and they’re going to make sure to infect every single person they can before that happens. It’s your name and your legacy. In order to truly embrace it, you must see your downfall, see the bed you will lie in as you die, and strategize how you get there. Did you ride the bus, sneezing all over everyone as you do so? Did you go to a high school play and evacuate your bowls in your chair during Act 2? Whatever it may be, you must visualize the end of your world, and work backward to ensure you infect as many people as possible on the way there. Go with the end in mind and you’ll find yourself gaining the fame you know you deserve.

I cannot stress this habit enough: you must put first things first. What do I mean by that? Simple: Priorities. You need to figure out your priorities and set them ahead of everything else. If you want to be the man responsible for the death of thousands, perhaps millions, due to your sheer toxicity, then it is crucial that you set a goal and aim to achieve it. Set your priorities and figure out how to achieve them. If your aim is to spread your disease, then practice you art. Learn to sneeze with the highest volume of saliva as possible. Figure out the absolute maximum range of your vomit. If you want the President of the United States to personally say, “seriously, this guy is incredibly infectious. Please quarantine him and never go anywhere near him again,” then you need to put first things first. Figure out what kind of infectious leader you want to be. The kind that spreads his or her disease as widely as possible? The kind that spreads to the proletariat? Whatever it may be, find your goal, practice your trade, and stick to it.

No matter how hard you try, you’re going to be hospitalized. There’s nothing you can do about it (unless you die too quickly). But you need to consider this situation like any other: how can I mutually benefit? How can this be a win-win for both myself and the doctors? Depending on how dedicated you are to your cause, anything can be turned into a positive. For example: you’re in a hospital bed after contracting a particularly infectious H1N1. They tell you to stay in your room so they can run some tests, maybe create a vaccine—the dreaded word all us infectious folk despise. That seems like the end, right? You’ll have some tests done, and then become a cure. Not exactly. A dedicated individual will accept that the doctors will use their blood to create a vaccine—there’s no getting around that. However, they will also find the benefitting factor. They will not stay in that room and wait out the end, they will get onto their weakened feet and head straight out that door, into the hallway, and vomit on as many people as possible. They will streak through the waiting room and urinate on the masses, spreading their infection like herpes at Woodstock. Yes, they will get caught. And yes, their blood will be taken. But they’ve still done their part in creating a win-win scenario: they’ve infected others, perhaps with a new strain, and made an even better name for themselves.

Habit 5: Seek First to Understand, Then to be Understood

There are a lot of naysayers out there, people who do not believe in our shared cause. They think that spreading infections isn’t actually a good thing, that we’re “misguided” in our attempts to our-infect one another. There are entire organizations dedicated to ending the diseases we dream of acquiring and spreading. It is crucial that you, as a leader in the world of infectious folk, understand their reasoning. You do not need to agree with it, nor do you need to support it, but you do need to know what it is they are saying. Only then can you provide counter-arguments, while holding them down and coughing violently into their forced-open mouths. A truly infectious person is not just sharing their illness, but they are also sharing their mindset. They are sharing their beliefs and spreading their ideology. Only once you understand can you be understood. So get out there, pin down a few protestors, and listen to what they say before you show them the light.

So you’ve got yourself that strain of Ebola we mentioned earlier. Congratulations, that’s one of the most infectious and deadly illnesses today. Yet, if I asked you how you could make it even stronger, make it even more aggressive, would you know how? It’s quite simple: synergize. You, alone, do not have the same power as you combined with another. While Ebola is great, Ebola laced with Meningitis is truly infectious. Imagine you and your buddy Carl, arm-in-arm as you vomit all over some lucky guy. He may have been immune to your Ebola, but god damn does his body love that Meningitis. Combining your strengths with another allows you to literally double your rate of infection. Yes, you may need to share your spotlight: no longer will Mr. Obama take the stage and say, “Guys, seriously, stay away from so-and-so,” but rather “Stay away from so-and-so and his pal Carl.” Yes, it’s hard to share your celebrity, but it is important to remember that being infectious isn’t a one-man show. You can’t be in it for just yourself, but rather for the end-goal. Synergy is the key for getting you there.

You’ve already mastered the past six habits, but something just isn’t right. You’re running around the New York City subway, vomiting on people like a homeless man on a typical Saturday. You’re at Disney World with your unvaccinated child, smearing his spoiled diaper on as many of your fellow humans as possible. You’re at work, you and your infected colleagues pinning your coworkers down as you cough into their mouths. Yet, for whatever reason, some of them are not getting sick. Some of them remain healthy, strong, and confident. What are you doing wrong, you ask? Nothing, honestly. You’re doing everything right – but there is still a secret weapon, a final tool in the arsenal of every infectious person. You must Sharpen the Saw. No, I don’t mean that in figurative sense, like you need to sharpen your wit or something stupid like that. I mean you need to literally sharpen a saw and carry it around with you. Take it to work. Take it to Disney World. Take it on the subway. When you do encounter that person who simply won’t get infected by your coughs, excrement, or anything else, remember your last-ditch tool: the saw. Nothing is as contagious as human blood. So when you do meet that person—and you will—you’ll be ready. You know where your saw is, you know it’s sharp enough to spill some blood and get things flowing. So get it out, remove a few fingers, and spray your disease like a sprinkler filled with Kool-Aid.

So there you have it, the Seven Habits of Highly Infectious People. If you follow these suggestions, I guarantee you will see a change in your life (and your lifespan); I guarantee that you will be spreading whatever terrible illness you have like wildfire, killing off the masses while your name is vilified and your legacy destroyed. If you commit my teachings to memory and truly embrace the seven, I promise that you’ll find yourself quarantined in a room, alone, with hundreds of thousands of infected people all screaming your name in disdain.