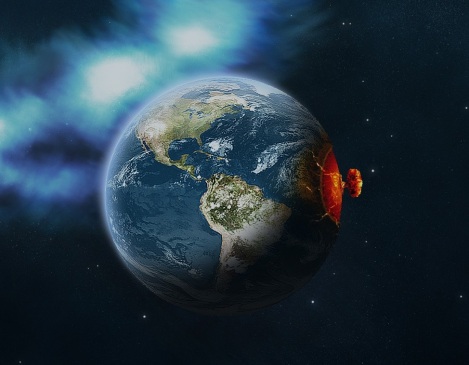 “Hey Dave,” Chuck said, left hand resting against the window as his right hand grasped the bar below it to stabilize himself.

“Remind me, was Russia always on fire?”

Dave floated over to the window, his legs splayed out behind him like Superman. He lightly bumped into Chuck, who shifted to the right to allow Dave to fit.

“I’m going to be honest with you, Chuck, I’m not entirely sure.”

Chuck stared out the window. Russia—or at least what he thought was Russia, it was pretty hard to tell when the Earth didn’t have labels on it—was shrouded in a dark, enveloping smoke. He tried to think back to earlier in the week, even just a few days ago, to when they had last floated above Russia. He recalled, although he couldn’t be entirely sure, that Russia had not been a giant, abstract blob of smoke all those hours ago. It might have had some ice or something.

“Dave, I’m pretty sure Russia wasn’t on fire last time we were over it,” he said. Chuck turned to his right and looked at Dave, his forehead pressed against the plastic window as he stared down toward Earth. Dave’s long, greasy hair floated wildly an all directions, reminding Chuck of a picture of Medusa he had seen as a child. He’d always liked Medusa, although he figured it’d be pretty difficult to feed snakes when they lived on your head. He also had the deep, burning question of how the snakes went to the bathroom. Did they just pee all over Medusa’s head? Or did they pee inside of it, right into into her brain?

“Are you sure? I mean, the Sun was always on fire, right?”

“Yeah, the Sun was definitely on fire before today. I’m positive about that one.” Chuck thought back to the day they had launched into space. He had spent the morning staring at the Sun, the result of misunderstanding the mission they had been assigned. He had thought they were to be the first people to land on the Sun to perform scientific experiments, and decided to stare at it in order to begin preliminary research. He later learned, after almost severely damaging his vision, that they were not going to the Sun. They were simply going to be orbiting the Earth in an automated shuttle. Apparently it was to study the “effects of space on the unsupervised mentally handicapped,” whatever that meant.

“Well, Russia might have been on fire too then. I mean, why would only one thing be on fire? Have you ever seen just one thing on fire?”

Chuck glanced back out the window and thought about the question. Had he ever seen only one thing on fire? He’d seen a wildfire once, and there were definitely multiple things on fire then. Mostly trees, a few animals, and one firefighter. What a crappy firefighter, getting lit on fire like that. He should’ve fought that fire a little better.

“Not that I can think of,” Chuck said.

“Exactly. Plus, look at America over there. It looks like it’s also on fire.”

Chuck pressed his forehead against the cold plastic of the window. America was definitely on fire, the same black cloud floating over it as had Russia. In fact, there seemed to be several thin streaks of what appeared to be smoke tracing back and forth between America and Russia. It was as if a child had drawn thin, arcing, gray lines between the two, with each ending in gigantic, fiery craters.

“America definitely wasn’t always on fire, Dave,” Chuck said. “I grew up there and I was not on fire.” Chuck was sure he hadn’t been on fire. He had once burned himself on two lit candles when he tried to bring them up to his room, though. It hurt, he ended up dropping them on the floor and having to stomp out the flames. “Well, America was on fire once when I dropped a candle, but that’s it.”

Dave gasped and pointed to the window.

“Look! America just exploded a little bit,” he said. Chuck followed Dave’s finger, his eyes stopping at a clearly visible blob of what appeared to be fire. A thin, arcing gray line extended from the light all the way back to Russia.

“That definitely wasn’t there before,” Chuck said. Dave nodded in agreement, then pushed off the wall. Chuck watched as he floated backwards toward the interior of the shuttle.

“Where are you going?” Chuck said.

“Getting my iPhone. Somebody needs to call the fire department.”

Writing Prompt: World War 3 breaks out between the USA and Russia, leaving the American and Russian astronauts on the International Space Station stranded.